Lägg till i din kalender

Today, some of Uppsala University’s museums contain old specimens of embryos, fetuses, newborns, and women’s pelves. These have survived from obstetrical and embryological collections assembled in the “age of museum medicine,” when museum collections were central sites of medical research and education, alongside clinics and laboratories.

The purpose of this compilation thesis is to examine how medical knowledge of fetal development, pregnancy, and labor were produced and communicated through such collection objects, along with models and surgical instruments, at Uppsala University circa 1830–1930. Collections are conceptualized as materializations of medical knowledge and the investigation is organized as four research articles: two are studies of the obstetrical collection and two deal with the embryological collection. Based on analyses of the materiality of the objects, as well as the surrounding system of information (e. g. museum catalogues and labels), together with scientific and popular publications, the case studies shed light on the making of the collections, but also on their shifting uses and meanings over time. Using a wide definition of knowledge, this thesis explores the dynamic relationships between the collections and a heterogeneous set of historical actors, including medical men, midwives, patients, and priests. The social networks and different social worlds these actors belonged to are shown to have impacted the understanding of collection objects, which became contested boundary objects.

Building on previous research about medical collections and drawing on previously unexamined empirical material, the study shows how the actors involved in the formation and uses of Uppsala University’s obstetrical and embryological collections produced a wide range of medical knowledge on reproduction. This included expanding expertise in managing complicated labors and pregnancies, knowledge of fetal malformations and normal development, and also contributed to constructions of race, nation, and sex. In addition, this thesis demonstrates that the embryological collection was used to introduce a biological view of life to audiences outside of the university, such as schoolteachers and secondary school pupils, thus constituting a form of public science.

Contributing to the growing historical scholarship on medical collections, Kroppar i förvandling argues that while obstetrical and embryological collections tend to be investigated separately, there is much to be gained in examining them together: the collections co-produced each other as well as the categories they represented, such as the pregnant and laboring woman and the fetus. 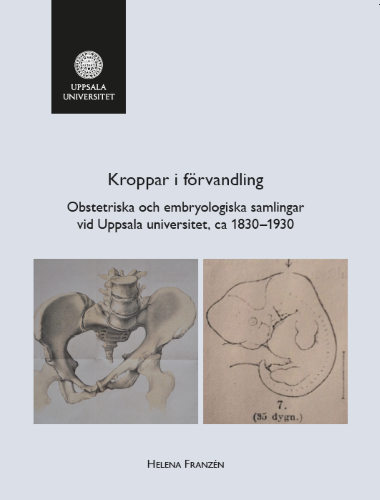